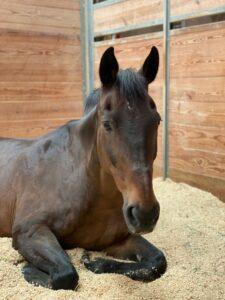 Last week I learned another lesson from the farm. Pierre was the giant Charlet bull we borrowed from the Dennys because he refused to stay home when all the cows there were bred. We still had some open cows, so for a while he was content to sojourn at Heathermoor. Because of his stupendous bulk, if he had any notion at all to leave a pasture, he became a clear illustration of the original concept of a bulldozer. He simply crunched any fence in his path, including metal gates. Nothing but electric fences were any barrier to him. He would stand in front of an electric fence and pass his nose back and forth above the fence. By this he could sense whether or not the current was on. If not- watch out fence! His only motivations in life as far as I could see were cows and his insatiable appetite for grain. He had learned that colt kicks and bites were harmless against his insensitive sides so he easily shoved eight yearling colts aside as he inhaled their allotment of 50 pounds of grain a day.

We didn’t realize what was happening for about a week in which time we noticed the colts appeared to be losing weight. Our only remedy was to remove the colts from the pasture they shared with the cows who had not dared to try to eat with the horses.

As John was at work and the boys were in school, these jobs usually were mine to do unassisted. By rattling a feed sack I managed to coax the colts to a section of fence I had removed directly across the driveway from the gate to the field we wished to put them. It really took some tact to “sneak” the herd of colts to the gap without Pierre seeing me. To him I only meant buckets. Buckets held grain and if I ever called attention to myself he came lumbering towards me, building up speed until he sometimes reached a lope. The sight of this mammoth white creature with legs as big as trees and a head as big as a buffalo approaching at a walk, much less at speed could cause the strongest heart to falter!

With what I like to think of as extreme finesse, I led the greedy colts through the gap directly into the receiving pasture. The lead colts took their first faltering steps onto the unfamiliar land, their necks bowed, snorting suspiciously at the ground, their tails curled over their backs. Suddenly the leaders bolted toward the new freedom. I relaxed, trusting the powerful herd instinct that binds horses into herds to carry the remainder of the column safely through the gate. But, I didn’t count on one hard headed black filly who from birth had always seemed to be of a different mind from the others. She swerved to the left of the gap and bolted across the front yard. The herding instinct bound the colt Solomon behind her close to her heels. Off the two renegades fled. Tails flagged, noses high as if they knew for certain that they had gotten away with something cool!

But their lark was short-lived for the main herd had galloped out of sight in the new pasture and the black filly soon realized her predicament. There was a fence between her and the rest of the herd. Above all things she wanted the security of the herd. She screamed a call to them and raced madly along the fence followed by Solomon, the little stud. Being the stronger willed of the two, at least in this event, the black filly became Solomon’s security and he stayed glued to her heels. There was another gate close to the feeding shed partly obscured by two large Oregon Grape bushes. I opened the little gate hoping the two yearlings would notice it as they raced along the fence seeking to rejoin their brethren. The black filly saw it and swerved through it home free. She was going so fast little Solomon had passed the gate before he could stop and the bush hid it from his view. Now Solomon was really a frantic colt.

The only security and comfort his equine heart understood lay in rejoining his brethren galloping in a tight little herd on the other side of the white board fence. He wheeled and charged down the fence following the bunch which had galloped back toward the fence, but again he was going so fast and so frantically that he passed the little gate. Then the herd turned and raced away from the fence down the hill toward the lake, thoroughly enjoying their romp on the exciting new ground.

A horse’s homing instinct guides them in a straight line toward their destination. They do not seem to fathom the idea of going very far out of their way to go around something. So Solomon was frantically racing back and forth along a little section of the fence where he had last seen his family, lunging into it and whining piteously. All my efforts to herd him to the little gate only ten feet away which would lead him to his heart’s desire were in vain. When I tried to head off he charged through me, when I tried to drive him forward, he lashed at me with both hind feet and caught me squarely in the stomach.

As I rolled on the ground nursing my injured middle, I called to him, “Solomon you certainly don’t live up to your name. You are not wise at all. Don’t you know by now my only concern for you is for your own good? I want for you just what you want for yourself. If you could just trust me to haze you to the other side of the bush all your troubles would be over. Don’t you know it was I who was with you when you were both? It was I who held you on your contracted legs until the tendon stretched out enough for you to stand? Don’t you know it was I your mother trusted to feed you each day and to scratch your fuzzy little tail? It was I who has fed you every day of your life since then. Haven’t I always taken you to greener, safer pastures? The only times I hurt you were for the shots and worm medicine that saved you from a greater hurt. Even now my only concern for you is your own good. Why won’t you let me save you from this anguish? Don’t you know that I can understand things that you cannot?”

As I resumed the struggle with Solomon I thought how often The Good Shepherd must see me as I saw Solomon. How much He must want us to trust Him, as I wanted to silly colt to trust me. I saw how often we resist Him who is so much wiser than we, when all He wants for us is our own good. If only we could trust Him who created us, who sustains us day by day, who died to redeem us? All this He does so that we would realize the very purpose for which he created us. How often we missed the narrow fate because we were frantically going on ahead of Him, refusing to trust Him, and let Him guide us past the obscuring bushes. How much sweat and anguish and time we could save ourselves if we trustingly followed The Good Shepherd who sees as we do not; who knows our needs better than we do; whose ways are as high above ours as the heavens are above the earth. His wisdom and His ways are many times higher than mine were above the panicky colt.

Lord, give us the wisdom to trust you to guide us even when it totally contradicts our natural senses. Have you not said, “The just shall live by faith?”