On January 10th, 2009, we came home from the baby shower for my son. Someone had left a loaded gun in their vehicle. When they tried to remove it, it dry fired. It went through the seat and the door when my daughter Hailey Grace was walking around the side of the car. She was hit on impact with shrapnel from the bullet. The doctors told us she wouldn’t live through the night. That day is now known as ‘Hailey Grace Day’ because she did. She lived.

In the blink of an eye, Christy Leslie went from having a typical child to having one who is legally blind, cognitively impaired, and suffering from PTSD. After the accident, Hailey Grace was forced to re-learn everyday activities most people take for granted; she spent months in the hospital learning how to walk, talk, and eat. She also struggled to find adequate therapeutic opportunities. Hailey Grace graduated from her occupational therapy program because there was “nothing more they could do” for her physical and speech impairments. The Red Barn not only offers physical benefits, but also a sense of comfort and hope that traditional therapies cannot. 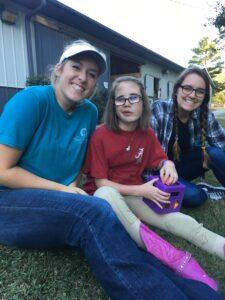 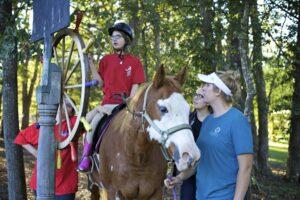 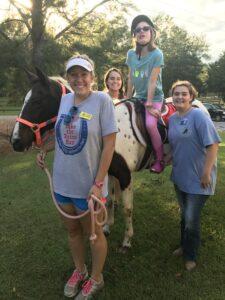 She LIVED, and Now She Rides

Being at The Red Barn has given Hailey Grace confidence and autonomy, on top of the physical benefits. Hailey Grace’s instructor pushes her to do things because she knows she is capable. She makes her clip on the reins and buckle the saddle’s girth underneath the horse, which strengthens Hailey Grace’s right-sided weakness. She has also learned the meaning of cause-and-effect; if she doesn’t do what she’s supposed to do, then she’s not going to get to do what she wants to do: ride horses.

Hailey Grace loves The Red Barn so much that she even created a braille calendar so that she can count down the days until her next riding lesson, which are marked on the calendar with a sticker.

The Leslie family now celebrates the anniversary of Hailey Grace’s accident with cupcakes and happiness. They don’t want the memory to haunt Hailey Grace and tear her down, but rather to empower her. They want Hailey Grace to look back on the day and remember it as “the day God decided that I was going to live and I was going to prove to everybody that I could do anything.” The Red Barn has helped Hailey Grace find the ability, both physically and emotionally, to prove that.