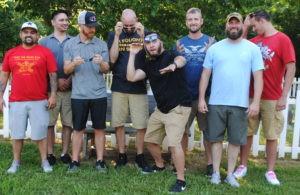 On a sunny day in Leeds, a group of veterans gather around the glistening pond where the property begins. They are here to participate in our Take the Reins program, which invites veterans and their families to come out for various activities at the barn. They congregate together today to do activities with the horses and to learn how to relax and cope with their PTSD. This program they are participating in is called “Take the Reins,” a metaphor for the veterans learning how to take the reins of life after war.

The group walks from the pond to the upper barn. Two horses stand in the cross-ties while the veterans gather around to learn about their first activity – painting the horses. They can paint anything they want on the horses, whether the strokes have meaning or not. The goal is to allow them the artistic canvas while also reaping the benefits of interacting with the horse. As they begin, a strong, blonde-haired woman named Shelley paints on Black Flight with her neighbor, best friend, and fellow vet Pat. As Shelley paints, her markings come alive with colors and images that resemble memories:

Here, near the front, I’ve painted the heart and stripes to show my love for my country. Those years of service will stay with me. On the horse’s rump, I’ve painted the United States Navy anchor with some pink, because I love pink and it should be more widely accepted in the military. On her front leg, I’ve painted vines and leaves growing up and wrapping around to show that my roots will always be on United States soil, no matter where I am. The yellow line painted on the horse’s spine is the yellow line of fear. Bravery is overcoming that fear.

The sense of relief and relaxation as she talks about her artwork on Black Flight is tangible. Black Flight exudes equal relaxation as she drops her head and breathes deeper with every brush stroke. Shiloh stands across from Black Flight. Shiloh is smaller than Black Flight, allowing a more comfortable option for those who are intimidated by larger horses. There are always options at The Red Barn, which finds people’s strengths and places them in positions that promote the opportunity to shine.

After finishing their exercises at the upper barn, they head back down to the pond where the original “Red Barn” building stands. This allows time for the veterans to reflect in a more open, natural space. As the geese float on the pond and the surrounding birds chirp, the group gathers around the amphitheater in between the Red Barn and the pond. The group breathes together and interacts with their surroundings. The veterans then engage in more art, writing, and acting sessions.

During one of the writing sessions, Shelley’s friend Pat reads what she would tell her twenty-year-old self. Pat’s voice quivers as she reads aloud:

I was scared for the future, so I would have wanted to give my twenty-year-old self encouragement. I would tell her to trust in the Lord to show her the way, and to not fear the war. Recently, I have been attending grief counseling because my husband died in August. I’m giving my troubles and releasing my worries during these hours in counseling. Today has helped me so much. My parting words to my twenty-year-old self would be that you are going to go through hard times, but to be encouraged because God will help you and take you through them.

Pat’s powerful testimony shows how The Red Barn creates a space where participants can finally let go of their struggles. The horses’ calming attitudes have a way of tearing down emotional walls and helping create a sense of release. The atmosphere at The Red Barn naturally allows for people to not feel judged or pressured. The participants are encouraged and allowed to feel free of their burdens, even if just for a moment. Those that arrive on the property are  welcomed back with open arms. This is their place to belong. 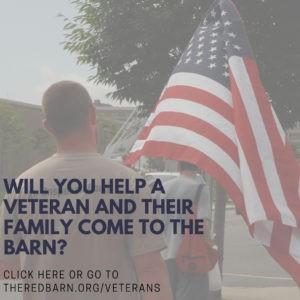