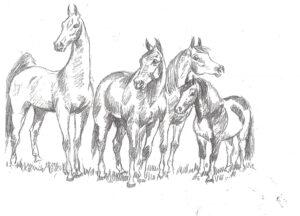 One of the wonders of creation that has never grown old to me is the birth of a foal. It speaks of design by a master engineer. It is a wonder and an awe that increases as you consider all the aspects of the miracle of life. On afar where this event occurs so frequently one is privileged by increasing exposure to these wonders of the creation and the time to ponder their significance, for the creation is ever preaching the glory of God if we will just take time to listen!

The foal, like all animals, begins from a microscopic cell that contains the code of the characteristics of all the generations of horses who have gone before it. The breeder’s job is to try to combine the genetic codes as they are expressed in the appearance and abilities of both parents in a way that the desired characteristics of each will combine in the foal that they have bred. There are infinite possibilities, but by continually sifting and sorting the genes by breeding together the individuals that come forth with the most of the desired traits and discarding the others, man can partner with God to bring into being an animal closely resembling a certain set picture in the eyes of the breeder.

What a wonderful thought and worthy of much meditation! God the creator, though He made every species to bring forth after its kind, put within the kind so many possibilities of variety that we were given the privilege of joining Him in the role of the Creator. Breeding is very much like painting a picture with genes!

It was in the beginning of all things earthly, in the Garden itself, that God made man in His own image. The greatest aspect of this is the creative genius He put in our hearts and the authority to use this gift when He also gave to man dominion over the creation. What a thought to consider! Throughout all eternity we will partner with God in creating. I am so thankful for this truth because I used to think Heaven was just a place where you sat and played a harp, or walked around golden streets. To me that seemed like it would get awfully boring. But the plan laid out in the creation for us to see is that God is the author of infinite variety. To know God is to have an eternity of ideas and goals to pursue. Each creation of His is totally unique, consider that everyone’s fingerprint is different. What a miracle that within the tiny surface of the tip of a finger a few circular lines can have such infinite variety that the trillions of people who have been born since the beginning of time never come out the same!! Each one of His children is that special to Him, and created for a special unique purpose. Oh – the infinite possibilities that lay ahead of us!

It is also interesting to me that again we see how high God has put man above the rest of the animals in that none of the animals have creative ability. The animal only does that which was programmed into its genes in the beginning. The beaver who cut down the trees on Heathermoor Farm dragged them to the proper place to dam up Dry Branch, a wet weather spring, to make a lake for us arranging the logs in such a remarkable fashion so that his underwater house would hold air that the beaver was designed to breathe. Yet this beaver never made a better dam than his father or grandfather. The plan for this dam, the understanding of the spot to put it to collect the water, the ability to cut down the trees and drag them to the building site, and the ability to engineer the building of the dam, was programmed into Mr. Beaver’s genes at creation and he is still building the same dam as the Adam and Eve of all beavers built all those that preceded from them.

These are glimpses of the creation that helps me to understand why God first put man in a garden and told him to work the garden and gave him dominion over all the earth. With all this He gave Adam the privilege of eating of the tree of life which would give him all the riches of true life with all its resources. Alas, the devil deceived him into desiring knowledge apart from God, and he ate of the tree of knowledge of good and evil which God had said would be certain death and turned his back on the tree of life. From this moment the whole creation became terribly bent and twisted from its intended purpose. Yet so great was the Father’s plan for His whole creation that the incarnation happened and the great Creator died in the person of His son Jesus and rose again to testify to the incredible redemption that was ahead, not only for man, His supreme creation made in His image, but for the earth and all its creatures.

No wonder the Bible says the whole creation is on tiptoe waiting for the restoration of all things to be set free from bondage to death and decay! Again, man will be in full charge of the garden. Can you even begin to imagine what glorious things await us, His redeemed children, together with the redeemed creation?!?