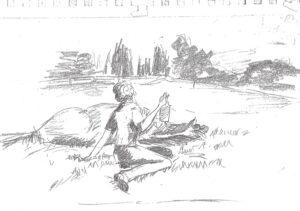 Vicky was a chestnut mare that I had eyes on since she was a colt playing in the field of a farm in Tennessee. She grew up to be very much like her dam, a famous show horse since her yearling days. Her dam, Denmark’s Vixen, was well named because she was almost vicious toward anyone except for her owner and our good friend, Bob Smith. The elder Vixen, a royally bred lady herself, had been mated with Blanchita’s Society Rex, who was later to become our miracle stallion. Their young daughter, therefore, was heiress to the best that royal blood could promise. It seemed that fate was jealous of something as especially endowed as young Vixen and determined to even the score with the chestnut filly Vicky. In her first two years she was dealt a series of devastating blows, but the trials only proved the gold of Vicky’s brave spirit, and she overcame them all. Her first bout was with a severe case of colitis. The veterinarian who attended her gave Vicky up for dead. When she struggled back to life, he declared she was the only horse he ever knew to survive the terrible disease.

Later she was left for dead by sunstroke only to miraculously recover. The doctor declared she would be so weakened by the assaults on her health that she could never stand the strain of traveling to a horse show. So, fairly early in her life, Vicky became a broodmare. We were happy indeed when circumstances caused our paths and Vicky’s to cross again when she was six years old and came to live at Heathermoor Farm to join Denmark’s harem.

We eagerly, somewhat nervously, awaited Vicky’s foaling time in the spring for we remembered the vet’s gloomy prophecy about the delicateness of her constitution. One overcast morning I noticed Vicky lying down in the paddock that surrounded the barn. At first I gave it no thought as I went about my duties, but an hour went by and Vicky got up and moved but once. I looked at her closely to see if any of the immediate signs of foaling had appeared and they hadn’t. She didn’t seem upset. And, she was not going through the usual pre-foaling routine of nervously walking and constantly getting up and down. She just lay quietly. Later that morning it became apparent that Vicky was having some sort of trouble and I called the vet.

We had seen many foals born in our experience, or at least we had been around when they were expected and then safely delivered by their dams. Yet, only once had we encountered a difficult birth among our mares or even our neighbors’ mares. Mares usually foal quite easily and efficiently by themselves. But, all the books warned that when trouble struck with a mare it was nearly always fatal to mare or foal, and the quickest of action was necessary.

Our vet, Barbara Benhart, arrived. She was quite unlike the stereotypical idea of a “horse-doctor” and this small, pretty, lady-like person limited her practice to only horses. Small and delicate as she appeared, she was an able doctor. She seemed afraid of nothing and able to handle any horse with the help of her black bag of magical tranquilizers and anesthetics. On examining Vicky, she announced that Vicky was indeed in trouble. Her foal’s head was bent backwards instead of lying on the front legs and pointed out the birth canal as it should be. It was a very difficult presentation. By now Vicky was in hard labor. The bog of water had burst and the two little feet were in view. Vicky was now down, stretched out on her side, in the typical position of a foaling mare. Barbara stretched out on her, stomach on the ground behind the mare and tried to push the foal back between the contractions so that she could find and grasp its nostrils with her fingers and pull the bent head around. A neighboring farmer came to help, but the contractions of the mare fought against all efforts to push her foal back enough to straighten its neck. In a little while it became evident that the foal’s neck was broken by the hard muscular contractions that battered it against the mare’s pelvic bones. By now Vicky had gone into shock and had lost consciousness. It seemed fate had finally overcome the promise of her illustrious heritage. Then with the help of a calf-pulling winch and another vet and Barbara, Vicky delivered a beautiful filly – its future already erased by death.

We administered glucose intravenously to the unconscious mare. As I sat there on the tender spring grass by her unconscious body and held the glucose bottle as it dripped slowly into her veins, I was overcome with depression. It seemed a sickening waste. All that was involved in producing that little dead body which lay on the ground behind me came to me; the mating of the mare and stallion at just the right time, the miracle of contraception that had produced in eleven months from two microscopic cells the fully formed young horse. Not only had it grown but it had been packaged so beautifully for safety during the incubation period in a shock absorbent waterbed with padding around the little hooves lest they poke a hole in the cellophane bag this miracle package was wrapped in. The wonderful timing system that had begun the birth process and filled the mare’s udder with colostrum that would immunize the colt against any diseases. There was warm pale milk waiting behind the colostrum and the wonderful, knowing instincts that should tell the mare to turn and lick this strange little wet body and love it and endure the first ticklish torment while it poked its head around her ticklish belly looking for the teat it knew would be there. And, there was the fierce maternal instinct that would turn the mare into a fighting machine if any other creature approached the foal’s rubber legged body which she’d never seen before. All these miracles and countless more could only speak of a designer, an engineer, a chemist, a physicist and even more because all these mechanisms that made up the horse was Life itself. A part of this life was love, the warm and almost bewildered excitement this mare would have for her baby.

But, even with all this perfect planning, something had gone terribly wrong. This mare lay unconscious scarcely breathing, and this foal so marvelously produced was dead. There could be no moral judgment on this animal. Vicky was just a helpless victim of some cosmic mistake. But, whose mistake was it? If God made the plan, had he also made the mistake? For indeed something had gone so very wrong. Then I remembered Romans 8:22 which I had learned years ago:

The whole creation is groaning in travail together with us. For we know that the things of nature like plants and animals suffer, in sickness and death as they await the great event. On that day thorn’s thistles, sin, death, and decay will disappear.

What I was seeing in Vicky’s fate was the result of the age-old curse brought on by man’s sin. For the whole universe had become violently bent, twisted from its original perfect purpose when man first wrenched himself from God and gave ear to the devil’s lies. It was to undo this curse that the Redeemer had died. The creation I loved so well was waiting on tiptoe with me for the great day when “death and decay would disappear” and we would share in the glorious freedom from sin which God’s children will enjoy. Another piece of the puzzle of life suddenly slipped into place.

The glucose bottle had dripped empty and there was still no stir from Vicky. We covered her body with a sheet to protect it from the immense heat as the sun headed for high noon. There was nothing else we could do so we headed towards the house. After a meal, we went to check on Vicky, but the sheet-draped mound was not on the ground where we left it! To our amazement Vicky was across the pasture grazing with the other mares! Since we had removed the dead foal’s body and Vicky had never seen it, her maternal instincts had not been set into motion and the tragedy for her did not even exist. Another of the Creator’s miracles. Once again Vicky had faced death and won. She broke the curse and through the years three other foals arrived with beautiful ease to mother and child.