Thank you, Alexis Braswell, for this beautiful tribute to Jessie. 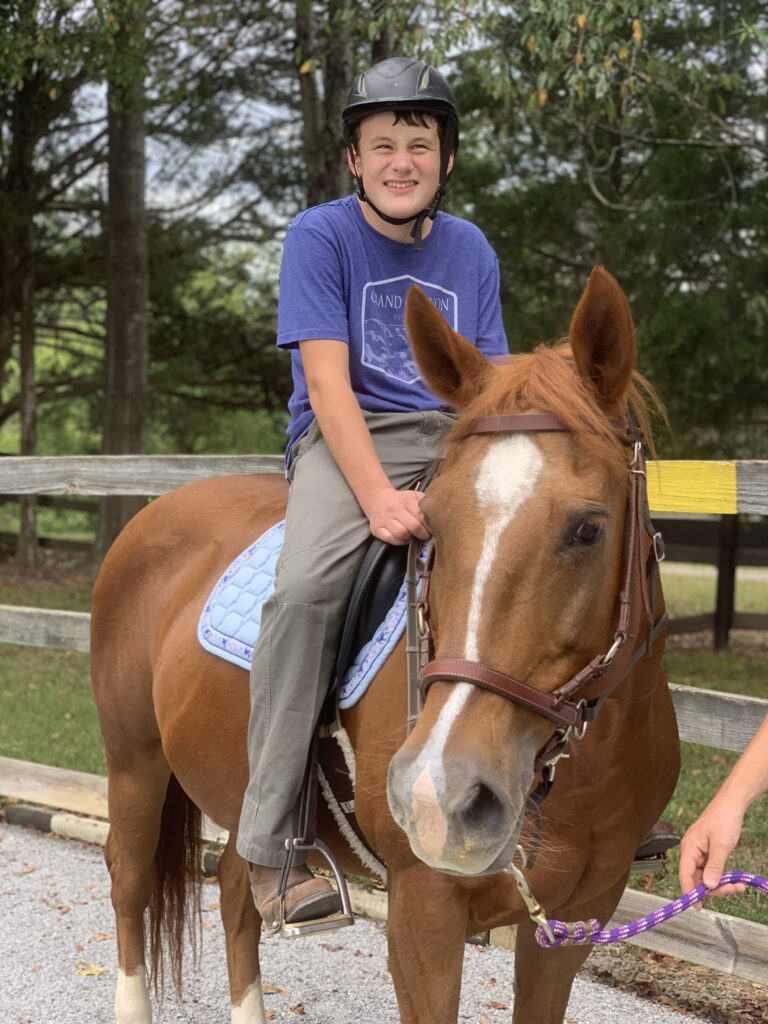 If you know me, you know that it was no secret that Jessie was my favorite Red Barn Horse. In fact, Jessie was one of my favorite horses ever – and I’ve been around a lot of horses over the last 30 years. As cliché as it might sound, she was special.

Jessie was the first horse that I picked for The Red Barn as the leader of the Horse Team. I had taught other horses to be therapy horses, but I was either working under or alongside someone, or was working with one of my personal horses who had joined The Red Barn. There was a lot riding on this horse for me personally. Jessie taught me more about prepping and training Red Barn horses than any other horse I’ve ever worked, including my own. She was brilliant. She held me accountable and she made me think – a lot. She challenged me. She made me smile. She made me better.

Jessie taught me the importance of making a plan. More specifically, Jessie taught, and frequently reminded me, that the horse training plan is, and always should be, based on the needs of the horse. People frequently ask what made me love Jessie so much. I’ve thought about that a lot and while I can’t define it 100%, I think I can get pretty close.

Jessie’s work ethic was unparalleled. No matter how hot it was or how hard she had worked the day before, her ears were always up. She would’ve happily taught 10 lessons in a row if we’d let her. To this day, I have not met a horse with a better work ethic.

Jessie changed lives and I loved that every time I had the privilege of working with her, I got to watch her make someone’s day better. If you were lucky enough to experience Jessie cuddling, then you know that I am talking about.

I think my favorite Jessie connection was the one that she had with my student Reid. Reid rode Jessie for the first time in November 2015. The lesson note from that day reads: “Reid’s best lesson ever”. They hit it off from the beginning. Reid rode Jessie until she got sick in early 2019. At the time Reid began riding Jessie, his anxiety was high. The barn needed to be his safe place. He requested to just spend time relaxing with Jessie. For almost a year, with the approval of his parents, Reid’s lessons consisted of him lying on Jessie’s back and telling her funny stories. You could literally see the tension leave his body as soon as he was with her.

A common misconception of autism is that those on the spectrum lack empathy and the ability to connect with others. Reid loved and cared for Jessie. He worried about her when she got sick. Even when he could no longer ride Jessie, he would ask to take time to “just visit and love on her a little.”

When it became apparent that Jessie would need to be put down, my heart broke. Not just for me, but for Reid and all the other people who loved her. We called to let Reid’s mom know and she brought Reid out to say goodbye. What I thought would be an incredibly gut-wrenching experience turned out to be one of my most memorable experiences from my time at The Red Barn.

Reid’s love for Jessie was so apparent. He hugged her and thanked her and led her while she ate some grass. After about an hour, he left. Then he turned around and said he wanted to pray for Jessie. He prayed the most heartfelt prayer that I’ve ever heard in my life. Thankfully, someone recorded it.

Here is a transcription of Reid’s prayer for Jessie: “Dear Lord, thank you for the time Jessie got to live down here on Earth. Help her to be brave when she goes to Heaven. Lord just keep us safe. Help us to help her have a good life in Heaven. Lord, we love you very much. Help everybody be happy and we love you very much Lord and we pray for you in Jesus’ name. Amen.”

That prayer brought comfort to all of us that day on a level we didn’t know was possible. Jessie connected to Reid on a level that can’t be explained other than by God. What makes Jessie even more incredible is that there are countless other stories out there of her doing the same thing for so many others. She really was special.

Unfortunately, cancer took Jessie from us too soon. I would have loved more time to learn from her, but I am eternally grateful for the 4 years I had with Jessie. She made every day at work better. She constantly reminded me why we do what we do and how life-changing a bond with a horse can be. There is not a day that goes by at the barn where I don’t use something Jessie taught me. Every program should be so lucky as to have a Jessie at least once.