Others may see his physical and behavioral differences, but we see how far Jackson has come because of The Red Barn. Jackson was born with Cerebral Palsy after he suffered a brain hemorrhage and stroke during his birth. Doctors said he would never walk or talk. Later, he was also diagnosed with Autism and struggled with grief after losing his mother at age 5. Therapy at The Red Barn has helped him with all of that. His motor skills, core strength, balance, and communication skills have all improved.               – Jackson’s adoptive mom, Leah

He arrives at the barn with a smile on his face. He runs to the board to see who Miss Sylvie has him riding that day. His name is Jackson and he has a passion for filming.

Fortunately, The Red Barn is able to incorporate his love of filming into his lessons. The barn’s videographer will often stand in the middle of the arena filming as Jackson completes each task. He asks to view the video after every task, but his instructor tells him that he must wait to see the video until the end. It serves as motivation to complete each task. 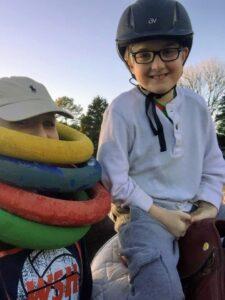 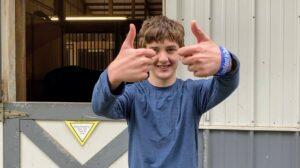 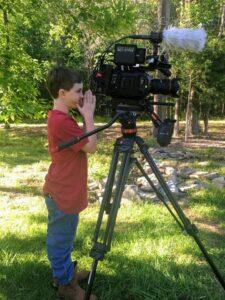 Jackson works hard doing everything the instructors and volunteers ask him to do. His overall health has improved, but he has also improved as a rider. Jackson has learned how to retrieve stuffed animals during riding games, as well as how to maintain concentration while riding. His increase in stamina shows, as well, as he trots around the arena. When he finishes each lesson, he has a huge smile on his face as he finally gets to watch the videos from his lesson.

In addition, The Red Barn has helped Jackson emotionally. When one of the horses, Red Flight, passed away, Jackson learned a new way to deal with grief. The instructors and volunteers were able to teach him that even though Red Flight was gone, we are able live on with the sweet memories we have of him. This was a pivotal moment for Jackson, as he could relate it to his mother’s death.

The best part about Jackson’s time at The Red Barn is that he has no idea that it is therapeutic! During sessions, he exerts all his efforts into doing his best which he usually doesn’t do for other therapy sessions. The results evident to his parents are cause for great joy.